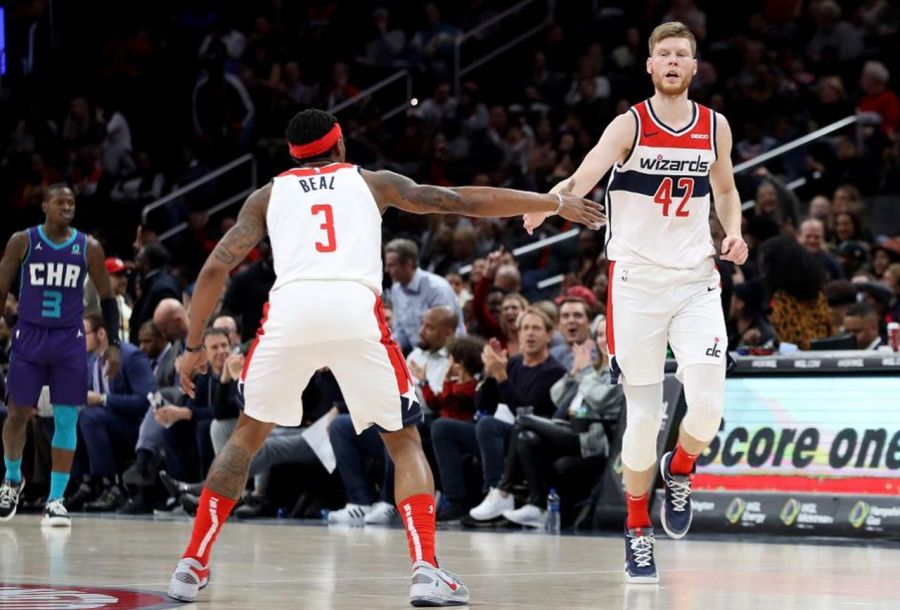 The Los Angeles Lakers are flying high at the top of the Western Conference, at present time. But that doesn’t stop rumours circling as the team are in need of another guard option, as well as a wing presence.

With the trade deadline fast approaching (February 6) and with the Lakers being, well the Lakers, speculation is running wild. Assets held by the purple and gold were demolished when Rob Pelinka and Co, this past summer, executed a trade to acquire superstar Anthony Davis. Kyle Kuzma appears to be the bait dangled in any trade packages speculated.

A recent report from Sam Amick of The Athletic states that the Lakers front office are entertaining offers for Kuzma. Later in the report, Amick suggested that this appears to be Pelinka doing his due diligence. Fans have been frustrated with the performances of Kuzma, who has had an injury-hit, inconsistent season so far, as he struggles to find his place on this now title contending Lakers team.

His trainer recently outing LeBron James in a social media rant certainly doesn’t help matters either. But apparently James and Kuzma’s relationship is intact according to various reports.

Plenty of trade options have been suggested in the media, which will be included in the round-up that follows:

Marc Stein of The New York Times tweeted on January 6 that the Sacramento Kings are among the teams interested in Kyle Kuzma, according to league sources. Stein went on to suggest that the Kings are aware that they would have to include 27-year-old guard Bogdan Bogdanovic, for starters, in any deal.

Bogdanovic is a ball-handling guard who can finish at the rim, and can be lights out from beyond the arc, on his day. He also has the ability to share the ball and create for others. So far this season, he is averaging 14.5 points, 3 rebounds, 3.6 assists, and 1.1 steals, on 42.6% shooting, 38.3% from 3.

A later report from Sam Amick did hint that the Kings aren’t interested in a Kuzma-Bogdanovic trade straight up, hinting that the salaries aren’t even close. Bogdanonic is on a $8.5 million contract, Kuzma is on $1.9 million.

Jason Jones, who is a Kings reporter for The Athletic recently tweeted that Sacramento would have to be “blown away” with an offer for the 27-year-old sharpshooter and are content with his up-coming restricted free agent status.

But then, a recent report from Tania Ganguli of the Los Angeles Times stated that the Lakers General Manager has “initiated a call” with the Kings to “gauge interest in Kuzma”.

It appears that a lot of work would need to be done to get a deal for Bogdan Bogdanovic over the line, especially with his $8.5 million contract. But he would very much fill a need for the Lakers, and would he be a better fit than Kuzma? Some think so.

Another name linked with the purple and gold, is 27-year-old Latvian, Davis Bertans. This is only his 4th season in the NBA, but Bertans is slowly making a name for himself, especially for his antics from 3-point land.

Currently with the Washington Wizards, Bertans is shooting at an impressive 43.4% clip from beyond the arc. This is the 9th best conversion rate in the entire league. Throughout his 4 seasons, he is a 41.1% shooter from 3. That’s exactly what the Lakers need, right?

Well, it appears so. NBC’s Chase Hughes recently reported that multiple teams were interested in acquiring the services of Bertans, despite the Wizards wanting to re-sign him this summer. The teams mentioned were; the Philadelphia 76ers, Atlanta Hawks, Boston Celtics, Denver Nuggets, and of course, the Lakers.

There has been no mention of what would be included in a potential deal, but with Davis Bertans being a guard, being a sharpshooter, and having a breakout season, he certainly fits the mold for what the Lakers are looking to add to the roster.

In terms of contract status, his is currently on an expiring $7 million deal.

This was one of the first names linked with the purple and gold via the trade market, D.J. Augustin of the Orlando Magic.

Heavy.com reported the Lakers’ apparent interest in the 32-year-old guard, suggesting that they have “inquired about a number of veteran point guards to help upgrade their backcourt”.

Former number 1 pick, Markelle Fultz seems to have revived his career in Orlando and has a strong hold in the starting line-up. Consequently, the Magic may be open to parting ways with Augustin.

With that, Augustin would certainly fit the bill with what the Lakers currently require. For starters, he’s a guard. He’s also a 3-point threat, a 38% career 3-point shooter. Additionally, he converts at a solid rate from the free-throw line.

Much like Bertans, D.J. Augustin is on an expiring $7.2 million contract.

Another need for the Lakers, aside from the backcourt, is out on the wing. This is where the Minnesota Timberwolves‘ Robert Covington comes into the frame.

Covington has been on the lips of Laker fans before the rumours starting circling. In an official capacity, it was ESPN’s Bobby Marks that first reported a potential package of Kuzma, Quinn Cook and DeMarcus Cousins as a proposal for Covington. But it wasn’t made clear if that would be enough for Minnesota to part ways with the 29-year-old forward.

Here’s the thing, while he would be a much-needed presence on the wing, Covington is an average career 3-point shooter that puts up basic numbers. He does rebound well but his numbers are similar to that of a “struggling” Kuzma this season.

As we entered 2020, the New York Knicks‘ Marcus Morris emerged as a potential trade option for the Lakers. Alongside city rivals, the Los Angeles Clippers, SNY’s Ian Begley suggested that the purple and gold were monitoring the market for Morris, doing their due dilligence.

The 30-year-old versatile forward is having a career-high season in points per game (19.1). He’s converting at an impressive 46.9% rate from beyond the arc, also a career-high. He can play both forward positions effectively and can be a spark off the bench, much like during his time with the Boston Celtics.

Marcus Morris fits the bill and more for what the Lakers are looking for, in a wing presence. This season he is red hot and them shooting numbers off the bench are Lou Williams-esque.

However, as with all of the above options, the contract poses a problem. As Morris is on an expiring $15 million deal. Many pieces would have to be moved in order to match salaries and complete a move.

Will the Lakers make a trade? Maybe, maybe not. It’s hard to say at present time given the success that the team is experiencing.

Tania Ganguli on January 10 stated that the Lakers are listening to trade offers for everyone, except LeBron James and Anthony Davis.

Although, Ganguli added that Rob Pelinka and Co are not actually desperate to make a trade, unless the right deal comes along before the February 6 deadline.

Kyle Kuzma has stepped up in recent games, against the Oklahoma City Thunder and Dallas Mavericks, too. Dropping 36 points in the prior, and 26 in the latter. Being instrumental in picking 2 road victories, in the absence of star Anthony Davis, and LeBron James as well against the Thunder.

In fact, in the last 10 contests, Kuzma is averaging 17.6 points and 4.6 rebounds, on 44.5% shooting, with impressively less than 1 turnover per game.

Should the Lakers even part-ways with the 24-year-old to begin with? Possibly not. Or maybe other pieces of the Lakers’ roster could be packaged together and moved? It’s all a jigsaw at present time, but one that should become more clearer as February approaches.