Welcome back for part 2 of the Lakers Fanclub UK roundtable. Many thanks again to Matt Evans, Kojo Larsen, Frank Gaulden, and Phil Sizemore for their answers in part 1.

The Los Angeles Lakers have continued their hot start to the season with another statement win against the Minnesota Timberwolves, 142-125, with Anthony Davis going off for 50 points.

If the Lakers can keep this level of play up they will be almost impossible to stop come playoff time. 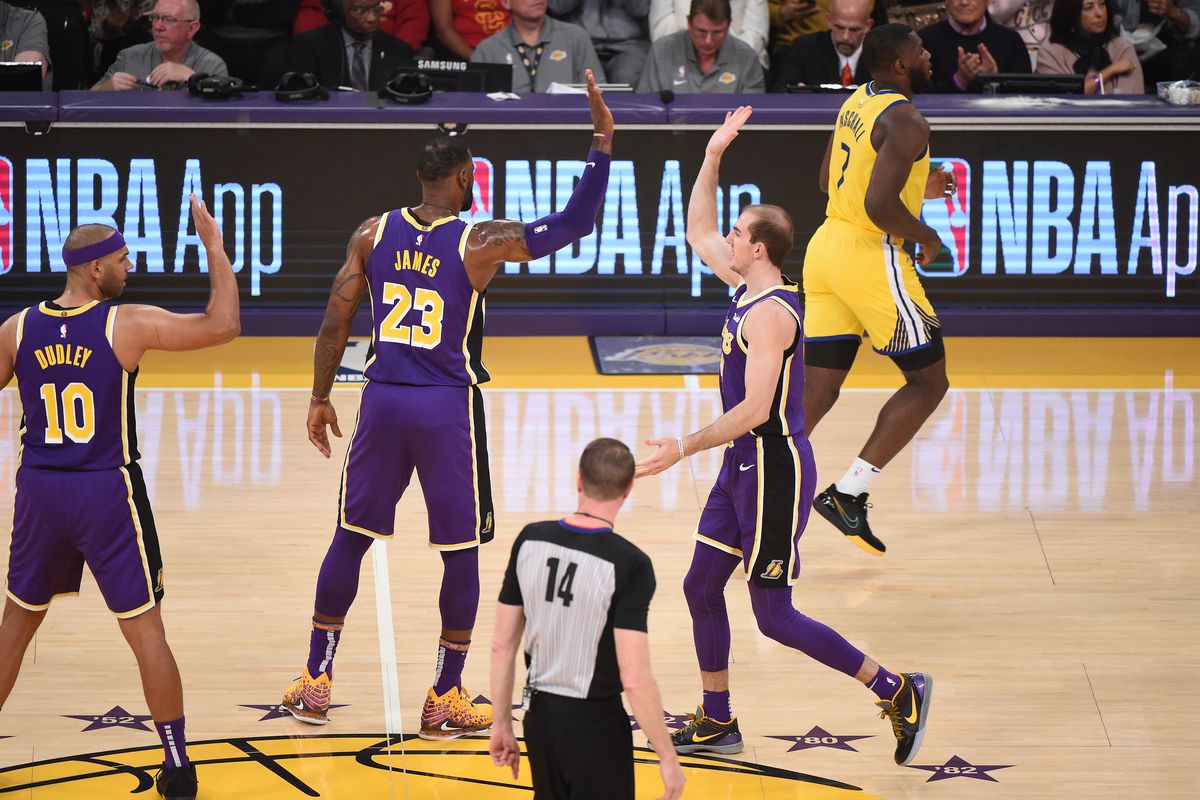 1. Other than Lebron James and Anthony Davis, who has been the Laker’s most impactful player to start the season? Explain their impact.

Jonathan Kiernan: “There have been numerous performers who have given a solid account of themselves so far this season for the purple and gold. Kuzma, Bradley, Caruso, and KCP have been extremely solid and deserve praise for their efforts. However, I am going to go with Dwight Howard.

Howard has shown Lakersnation this year everything they wanted to see in his 1st stint with the purple and gold. He is showing heart, effort on both ends of the floor, blocking shots at an elite rate, setting bone-crushing screens and dunking the ball whenever he gets the chance. He is going about his business and is being a good teammate. While he is no longer the All-Star he once was, he is a valuable piece to the Lakers and will be big in a playoff run.“

Srikar Devireddy: “Lebron James and Anthony Davis have been great for the Lakers, securing their place as some of the best players in the league right now. But another player that has been very productive to the Laker’s success has been Danny Green.

His ability to space the floor at all times and hit big-time shots gives him a special gravity on the floor. Green is also being more aggressive by driving to the paint and making effective passes. He is also an efficient defensive player, who is reliable to defend other elite three-point shooters.“

Jamie Cox: “Apart from the superstar duo, the most impactful player has been Dwight Howard.

I don’t think any Laker fans expected him to be so influential in the majority of games. The way he blocks shots and protects the rim has been on point and his general energy in games has lifted the crowd and his teammates to new levels.“

2. While the Lakers are firing on all cylinders currently, what is a weakness the Lakers have shown so far this season?

Jonathan: “Inconsistency in terms of effort for 4 quarters has been very prevalent this season for the Lakers,.

While they have been able to put most teams away in the 4th quarter, it would be so more efficient for the Lakers to punish teams early on, build up a big lead and rest the likes of LeBron and Anthony Davis late in the 4th allowing them to save their legs instead of forcing them to make clutch plays late and play big minutes in order to get the win.

Coach Vogel and Co. have made adjustments to the squad when needed, hopefully putting lesser teams away early is made a point of emphasis and leads to blowout wins and in turn, allows the Lakers to rest key players in the second half of the season.“

Srikar: “In many games, the Lakers look nearly unstoppable, however, they are not perfect. A quarter through the season, one of the Lakers’ flaws seems to be their lack of playmaking.

Now, Lebron James is one of the most effective floor generals in the league and the return of Rondo certainly helps, but when the ball is not in one of these two players’ hands, the Lakers tend to turn to a more isolation dependant team on the offensive side.

Although there are many talented iso players on the roster, it is almost always better to move the ball and get more open shots.“

Jamie: “The biggest weakness so far this season has been the 3 point line – not only shooting from it but also protecting it.

The Lakers have had tough games against teams who shoot the 3 balls well and despite adding plenty of shooters in the summer, the outside shooting could still be a lot better.

3. In a potential buyout market, who would be an ideal player to add to the Lakers?

Jonathan: “The Lakers could be one of the key destinations for players bought out in the buy-out market. With a team built to compete for a championship, it might only take 1 or 2 pieces to push the Lakers to the next level.

Realistically I could see the Lakers getting players like Jae Crowder, Trevor Ariza, Andre Iguodala and at a stretch Goran Dragic. Players of this ilk would give the Lakers real depth in positions of potential weakness. The Lakers must get depth behind LeBron James as to not run him into the ground in the latter parts of the season.“

Srikar: “There are a lot of potential players to add that could help the Lakers at the moment, two of which include Keneth Faried and Jamal Crawford.

Keneth Faried could serve as a great three and D player who would be able to further space the floor, as well as help, get more rebounds.

Jamal Crawford could also come in and be a similar player to come off the bench and add some playmaking, an area which the Lakers could have some improvement in. Crawford can provide bursts of scoring and control the pace of the game.“

Jamie: “The number 1 player that has been talked about for the Lakers to pursue in the buy-out market is André Iguodala and with good reason.

His abilities on defense alone would change the Laker’s ability to guard opposing wings. He would be the perfect fit on the perimeter for this Lakers team who sometimes struggles on defense outside of the paint. His basketball IQ is stellar and would be a valuable asset to this Lakers squad.

His Championship pedigree would also be extremely useful in a team full of experience, the “been there done that” factor will be extremely important in the playoffs.“

4. If you could bring back a former Laker role player and add him to this squad, who would it be and why?

Jonathan: “Lamar Odom without a question. Odom was well ahead of his time, his skill set along with his length would be of premier value in 2019.

His ability to be a playmaker, to rebound to score inside and out and his toughness would lend extremely well to this year’s Lakers team.

Having a point forward like Odom would allow for LeBron to get rest throughout the season and with Odom coming off the bench the Lakers would have one of the strongest benches in the entire league.“

Srikar: “One former role player that would be great to add to the Lakers is none other than Lamar Odom.

He was a pivotable piece of the championship team in 2009 and 2010 and rightly so. Lamar Odom was an incredibly versatile player, excelling at nothing, but being able to do everything at a proficient level.

Odom could serve as a swiss army knife of the team, being able to somewhat play all five positions, providing solid defense and efficient scoring on a nightly basis. Odom could help the Lakers by being a well-rounded player and giving the Lakers constant production.“

Jamie: “Lou Williams would be the ideal choice of any former Laker player to add to the current squad.

Anthony Davis and Lebron James contribute around 50% of the Laker’s total points so when they are off the floor, a 3rd man must step up to fill that void. Williams is definitely that guy, averaging a little over 21 points this season so far. He would push a talented Lakers bench to the next level.

Whether part of the starting line-up or coming off the bench, Williams would make a huge impact on a team that heavily relies on LeBron James and Anthony Davis for the vast majority of its scoring load.“

5. Predicting the Lakers record for the rest of the season and why?

Jonathan: “The Laker’s record will be heavily reliant on their ability to stay healthy throughout the season. While there have been minor injuries to the likes of Anthony Davis and Avery Bradley, there have been no season de-railing injuries which have put the season in jeopardy.

If the purple and gold can remain healthy, then it is quite likely they will be the 1st or 2nd seed in the West. The Lakers have the depth to allow the likes of Anthony Davis and LeBron James to take a back seat in the second part of the season, they will still play a key role in games, however, resting them during back to back games could prove very helpful come playoff time. I predict the Lakers finish 60-22 this season.“

Srikar: “The Lakers are on a roll right now, however, I find it hard to believe that they can retain this level of production for the rest of the season. I believe that once the Lakers reach 40 or so wins, they will begin to load manage LeBron and Anthony Davis more often, playing them fewer minutes throughout the game.

Because of this, I think they will start to win fewer games, ending the season with around 55-60 total wins.

Considering their schedule and projected season-script, I have them ending the regular season with a record of 58-24.“

Jamie: “The Lakers will face a much tougher schedule from here on in but there is no reason why they cannot have a 60 win season.

Thus far, they are not slipping up against some of the weaker teams like they have done in the past, but it is so tough to keep the high energy up for an 82 game season.

Taking this into account and some load management for the big 2, not to mention injuries, a realistic target should be 55-60 wins before the real tough games start in the postseason playoffs.“

Here at Lakers Fanclub UK, we are proud of the hardworking contributors who lend their talents to the website. Their dedication and love of the Los Angeles Lakers is felt in each and every article and we thank them for their stellar work.